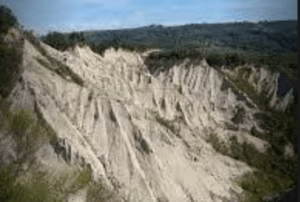 Poggio Montone, a hamlet of the Municipality of Orvieto known for the calanco that takes its name, is located in Montone[1]. Until the last decade of the nineteenth century, it had a part in a hilly position, Poggio Montone, and a part in a flat area, Pian Montone, a toponym that has now disappeared.
Despite being formed by scattered houses, it has the most consistent residential nucleus near the pond, called Poggio Montone, fed by the homonymous ditch and its spring branches.

The area, plagued by malaria until the beginning of the twentieth century, experienced a remarkable development after the purchase in the seventies of the nineteenth century of vast extensions of land[2] by a rich Roman entrepreneur, Cav. Cesare di Giuseppe Bertone.

Bertone[3] developed in those lands a large farm whose products were present in the main national fairs for the nurseries of local and American vines, for chicken coops and breeding eggs, for peacocks and for cattle farms (Chianina and others), sheep and pigs. In addition to traditional crops, experiments were also carried out on the farm for fodder plants, such as that of amber sorghum in 1888.
In the body of water the breeding of trout took place, and in 1891 the Roman Aquarium, as part of the repopulation of the fresh waters of central Italy, sent Cesare Bertone 1000 fry [4) 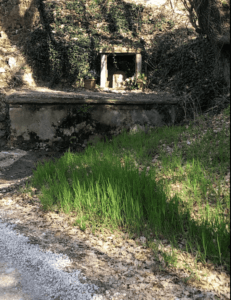 The estate, which had its epicenter near the pond with a manor house, church, farmhouses and breeding rooms, was known above all for horses, of which the owner was a passionate lover. The name of the stable appears for about half a century in the national equine exhibitions for racehorses, saddle horses, light shooting horses and heavy shooting horses, that is, for war, for trade, for industry and for agriculture.
In the equine exhibitions well known were the stallions and the English and indigenous mare mares bred in the Bertone stable, as well as the racing horses, often in the first places of the national horse races[5]. 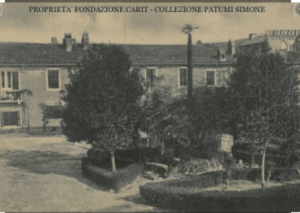 The estate, reproduced in the vintage photo, after the death of the Cavaliere passed to the Tiezzi – Bertone, and then to other owners. Since 1933 is located within the limits of the production area of the typical wine of Orvieto.

—————————————————————————–
[1] The site does not correspond to the one mentioned by E. Carpentier in his study on the city of Orvieto at the end of the XIII, which refers to a town located about 2.5 km from Grotte di Castro, the current Casal Montone.
[2] Il Cavaliere also owned land in Bagni, Bosco called Ponticello, Frattuccia and Tornaraccio.
[3] The name of Cav. Cesare Bertone, who had large estates in the Roman countryside, some of which were requisitioned by the state in 1871 for the construction of the Railway section Rome-Sulmona, is linked to the discovery in those lands of important archaeological finds, exhibited at the National Roman Museum of the Terme of Diocletian.
[4] These were the repopulation operations (1889-1890) carried out at the Roman Aquarium by prof. D. Vinciguerra.
[5] Known is the story of the mare Turrena, which at the end of her competitive career was sold to Gaetano Pacetti of Orvieto, who did not find it suitable for the services for which he had bought it and sold it to Pasquino Stella, a farmer, who in turn did not consider it adequate to his needs and put it up for sale.
The last buyer was a fishmonger from Bolsena, who used it to transport the catch to Orvieto, but the mare was not suitable for this job so, after having made her participate in the races that were held as part of the religious festivals, he delivered her for the threshing campaign of 1891, during which she died of exhaustion.

This website uses Google Analytics to collect anonymous information such as the number of visitors to the site, and the most popular pages.

Please enable Strictly Necessary Cookies first so that we can save your preferences!