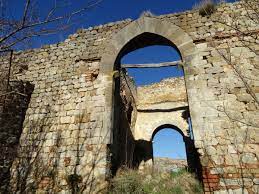 A few kilometres from the Monte Nibbio pass, in a dominant position over the Chiani valley in the direction of Orvieto, are the ruins of the ‘Conventaccio’. Of the imposing structure, whose original function is unknown, we can see the remains of a quadrangular wall, built with square ashlars of grey stone arranged in regular rows, with a large ogival arch on the south-west side, probably the main entrance to what may have been an ancient fortress.

In the Middle Ages, ‘Conventaccio’ seems to have been part of the possessions of the Bovacciani family, then the Filippeschi family and certainly the Monaldeschi family, lords of the nearby castle of Sala. It seems to have been involved in the struggles between Orvieto’s factions and in the fight against the Cathar heresy. As its original function disappeared, the building became a ruin over time, but part of it was later restored as a house for sharecroppers. In 1938, the Lupi family settled at ‘Il Conventaccio’, which became the property of the Antinori family and part of a vast estate. Liliana Lupi, who lived there for twelve years until 1956, in her book “Il Conventaccio. I miei ricordi” (Bookrepublic 2014)  describes the farmhouse as large and comfortable, suitable to accommodate a large family and providing rooms for the pantry and storehouse.  The kitchen was enormous with a large fireplace. Under the house were stables for housing and breeding animals.  The house extended along the original wall of the old building to the south corner of the quadrangle.

Beyond the large stone arch, accessed by a short, partially paved uphill passage, was a large hallway where tools for working the fields and other activities were stored.

To the right of the arch, a long, steep stone staircase led to the house. Another smaller archway led to the inner part of the fortress, which was excluded from the renovation and was cluttered with rubble. After passing through the rubble, one passed under a third arch opening in the third side of the wall, opposite the entrance. Perhaps there was originally a fourth arch in the last side of the wall, but this one had already collapsed completely by then.

Today,” writes Liliana Lupi, “the long, high wall that surrounded the house on three sides has largely collapsed; the house itself has been reduced to a pile of rubble; the surrounding area […] is almost unrecognisable due to the construction site of the new town”, i.e. the “village”, built as a holiday resort, which now stands out, interrupting the hilly profile of the place.