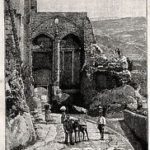 To the early twentieth century traveler Olave Potter the entrance to Orvieto through Porta Maggiore was anything but cheerful, for the arch was gloomy and the road within dark

and steep. Porta Rocca, located at the very tip of the tufa mass, almost seems suspended over the underlying valley through which the Paglia River flows.

Located at the easternmost end of the street that runs t

hrough the town from east to west, it was once known as Porta Soliana. When a small building with a postierla or postern gate was built on the upper part, it came to be known as Porta Postierla. The building also gave its name to what, according to the Land Register or Catasto of the city and the contado in 1292, was the largest quarter in the city and had all of nine districts. Moving northwest from this point, there was a large cultivated area known as vigna grande or large vineyard that reached as far as the Servite convent.

On August 16, 1313, there was bitter fighting here which saw “the towers set one against the other”, probably the bloodiest battle between the internecine factions that had taken place up to then.

The gate consists of a double entrance, with two flat arches on the exterior and two majestic pointed arches on the interior. The curtain wall along the central axis outside is in white and black courses of travertine and basalt. The gate may be an expression, according to the Orvieto scholar Pericle Perali, of that “period of fusion and transition” in which the old Romanesque style was coming to terms with the new Gothic style.

The niche for the marble statue of Boniface VIII can still be seen above in the center. This was one of the two statues, the other over Porta Maggiore, for which the pope was accused of idolatry. It was claimed that he was usurping the place of the celestial protectors set at the main entrances to safeguard the city.

When, as in all the cities subjected to the State of the Church, it was decided to build a fortress, it was set against the Porta Postierla, which then changed its name to Porta Rocca.

The original fortification, designed by Ugolino di Montemarte, the military architect of Cardinal Albornoz, was begun in 1364. It was square in shape, with a “palazzetum” (small building) adjacent to the gate – in the meanwhile furnished with “sbarras” (bars) – and with other service structures along the walls. The fort was also protected by a moat with two drawbridges.

A few years after it was built, the continuous struggles between the dominating families came to a head in a siege in 1390, and the fortress was destroyed. A rocca nova or new fort was rebuilt by Antonio da Carpi on the old perimetral walls, with the addition of a circular ravelin (1450-1452) and completed under the supervision of Bernardo Rossellino.